Journalists face many frustrations in their working lives, which can affect the way they work with PR and communication professionals. In February 2016, Mynewsdesk surveyed more than 2,000 journalists in nine countries and found seven key facts that could help you to better understand your press contacts. Here are the seven things you need to know in order to work well with journalists:

The biggest frustration facing today’s journalists is a lack of time. Almost half of the respondents to the Mynewsdesk survey said that time pressures are their biggest frustration. Publications want to get news out as quickly as possible, which means that journalists have to work fast. Therefore, you need to be ready to respond rapidly to journalists' questions and requests for more information.

Every time you pitch a story to one of your press contacts that isn’t relevant to their publication, you cause frustration. Around a quarter of the journalists who responded to Mynewsdesk's survey feel more irritated by irrelevant story pitches than any other aspect of their job. When you pitch a story to your press contacts, try to include an angle that makes it relevant for their publications.

Although journalists are constantly under pressure from deadlines, the biggest priority for publications is in-depth reporting that generates interest among readers. To create this kind of report, journalists must seek out supporting information to strengthen their stories. They may need to ask you for information beyond the initial press release, so have extra details and documentation at the ready!

The average journalist publishes content across three channels, which can be time-consuming. The three most common channels are print media, online-news websites and Facebook, with Twitter as a close fourth medium for publishing. Some journalists also publicise through YouTube, LinkedIn and Snapchat. This multi-channel approach means that both journalists and PR personnel have to carefully consider the readership on each platform and tailor their stories accordingly.

5. They’re creating more content than ever on tight deadlines

Three quarters of the journalists in the 2016 Mynewsdesk survey have tighter deadlines and more demands for content compared to five years ago. This fact presents an opportunity for PR and communication professionals, who can respond to journalists’ need for a constant stream of new stories. However, it also means that journalists you're contacting must be able to communicate quickly with their sources in order to meet their deadlines.

6. Journalists are shifting toward shorter stories

It's true; 59% of journalists say their stories have become shorter during the last five years. In 2014, the Associated Press advised journalists to keep all but the top news stories between 300 and 500 words. Modern readers, particularly those reading on mobile devices, are turned off by longer stories. This trend for keeping it brief means that journalists must write efficiently, trimming away extra words to maintain the quality of their stories without going over the word count. That's why your publicists should embrace brevity to make stories more appealing to journalists.

An overwhelming 85% of journalists claim that demand for visual content is growing. Journalists must source images and videos to support their stories. The shift from print media to online news allows journalists to use video footage in their reporting, creating a richer media experience for their readers. Consider providing video content to journalists along with typical text-based press releases.

It is vital for communicators and PR professionals to understand the challenges journalists face so they can work effectively together to create and publish better stories. To understand the state of modern journalism even more deeply, get your copy of our e-book “Journalism Trends 2016” today. 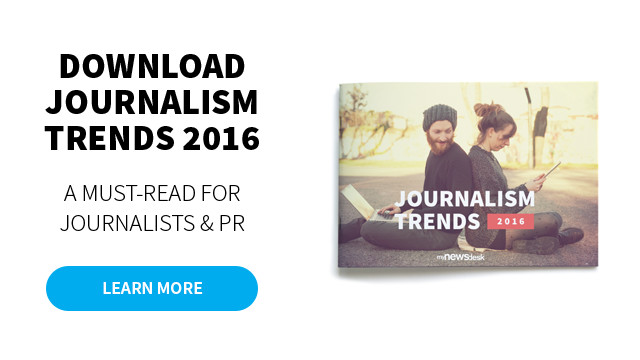 Whether you’re a journalist yourself, in PR or otherwise involved in communications, the journalism of the future is likely to rely on a complex web of independent freelancers. But what will that world look like?

Ever since the first press release delivered the news of a train derailment in Atlantic City in 1906, the press release has been an important tool for disseminating news by public relations professionals. But according to some pundits, press releases themselves have been derailed in today's high-speed, hyper competitive, digital world.

Before you put your “out of office” on and bid a smug farewell to your colleagues for a week or two, now is a great time to reflect on the trends, highlights and events of 2016 so far...

Join The Webinar: What Do Journalists Think Of PR?

​Don't miss out on this exciting discussion on the press and PR relationship in 2016. Join our 35-minute webinar where Christina Anderson, freelance journalist for the New York Times, and Johanna Snickars, Communications Lead at Microsoft, will talk about the PR and media connection.

​In the rapidly changing worlds of journalism and advertising, one of the fastest-growing trends is native advertising. While this development has created new revenue opportunities for publishers and advertisers, it has sparked some controversy as well.

Johanna Snickars, Communications Lead at Microsoft, discusses the importance of exclusives, the role of PR and why social media is a fundamental tool for media relations.