PR people work hard to carefully craft an image and communicate that through the media and bloggers.

There is usually a great deal of discussion about messaging or how to effectively convey the USP of a product or service. And if something happens to throw the PR strategy off course, a problem with poor customer service, or a faulty product, PR people leap into action to attempt to avert a crisis.

By issuing statements, speaking directly with journalists, writing blog posts or taking to social media, the communications team seeks to shape the perception of the company held by existing and potential customers.

But once a company becomes publically listed a different type of communications professional joins the team - the investor relations exec. There is a symbiotic relationship between the two roles, since communicating the financial state of a business effectively, or badly, can have a direct impact on the share price but equally a public relations crisis relating to a company’s products or services can cause share value to drop.

However, investor relations requires a subtly different set of skills and experience since all sorts of internal and external factors can affect share price. For example, Apple’s share price was reportedly affected by news relating to Steve Jobs’ health.

British mobile payments company Monitise is an established technology company originally founded in 2003. After it floated on AIM in 2007 one analyst described it as having 'masses of untapped potential’. Since then the business has seen its fortunes rise and fall and some financial journalists have said 2015 will be the year that makes or breaks the company.

As the business reportedly considers putting itself up for sale effective investor relations becomes critical, with the view of the financial markets arguably more important to the business at this point than general consumer opinion.

With all businesses the role that communications plays changes as it grows, from the early toddler stage, where seeking and gaining attention is the priority, to the troublesome teenager who may cause the odd crisis or two and on to a hopefully settled mature middle-life but with more at stake and more to lose.

It is yet to be seen whether Monitise can calm the current chatter around its future but what is clear is the vital role that its investor relations team will play in its future.

What are your digital PR challenges?

To build a picture of what is required of a modern communicator, Mynewsdesk, the leading online newsroom and all-in-one PR platform, is asking: what are your digital PR challenges? 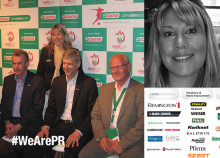 #WeArePR: The PR of politics

Christine Silfversparre is the 3rd interviewee for the #WeArePR series, an exploration into the evolving world of communications through #PRTech.