After its usual two-year break, Comic Relief’s Red Nose Day will be back on our screens for another three-hour marathon of performances, stories and entertainments*.

PG Tips - one of the nation’s favourite brew providers - is donating 8p per special pack produced to Comic Relief.

This is the first time the tea brand has partnered with Comic Relief but, along with their sister brand, Persil, PG Tips is attempting to raise over £1million.

Brand mascot, Monkey, has been given a red nose for the occasion and has been set the challenge of climbing The Shard! You can watch his climb here:

With Made In Chelsea’s Spencer Matthews starring in their TV ads and a range of merchandise on the shelves, Sainsbury’s has fully aligned themselves with Red Nose Day this year.

Watch the loveable/loathsome rogue in action for Comic Relief here:

Since the start of their relationship in 2005, TK Maxx has raised over £13.5m for Comic Relief.

The high street retailer has been selling Red Nose Day t-shirts (and a onesie...), designed by the likes of Matthew Willamson, Karl Lagerfeld (of Chanel) and Diane von Furstenberg. Similarly to Sainsbury’s, TK Maxx has enlisted some pretty famous faces to don the tees, including Lily Allen, Keira Knightley and Dermot O’Leary to name but a few…

The London based make-up brand is targeting a £250,000 donation from sales of its Kate Moss lipstick, with £1.67 from each sale going to the charity.

With the supermodel as the face of the campaign, Rimmel’s Red Nose Day efforts have already received front-page coverage on numerous magazines and stores have reported sell-outs of the lipsticks.

In line with “Make Your Face Funny” - the main theme of this year’s Red Nose Day -Specsavers is promoting comedy glasses. At £3 a pair, £1 from every sale will be going directly to the charity.

Gok Wan is fronting the campaign, posing with the red glasses (and ludicrous eyebrows). Specsavers is also selling them on their website.

Toyota seems to be one of the few brands who will be giving 100% of their proceeds directly to the charity. The money will be raised through the sale of novelty red noses for cars (not the cars themselves, unfortunately!).

This is the first time the manufacturer has partnered with Comic Relief.

Well, we couldn’t write a whole piece about other brands and not share our fundraising efforts, could we?!

The UK office will be out on the streets of London to compete for the most kisses, popping a pound in the pot for each peck on the cheek we get! Plus, we’ll be wearing red for the day and have “swear jars” dotted around the London office. 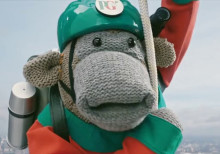 John Lewis has done it again with their heart-warming Christmas 2015 campaign, Man on the Moon. Watch the full video here.