Keith, can you tell us a bit about your involvement in the evolution of the online newsroom?

I've been involved with our online newsroom since we started offering press material via the web. At that time it was password protected. For some reason it was thought press releases had to be restricted to professional journalists. Seems hard to believe now. I took the lead in offering photography and later video via the online newsroom. It's something we take for granted now, but at the time it was innovative and there was some internal resistance and scepticism to overcome.

My team introduced a social media newsroom for GM Europe. It was built on a blogging platform and was among the first pan-European social media newsrooms. We recognised that technology made it easy for anyone to report or comment on our news. If our goal is to have informed commentary based on fact, it's in our interest to make sure people have access to the facts in a timely manner.

The social media newsroom included YouTube, Flickr and RSS. We introduced sharing and Creative Commons licensing. At the beginning we had two newsrooms: a "traditional" and a social media one. Over time, social elements were added to the traditional newsroom and we reached the point where we decided we could combine the two to create a single newsroom for anyone interested in our news.

What do think are the main things companies need to think about with their online communications?

Don’t think in compartments or labels. The media landscape has changed. Journalists blog. Are they bloggers or are they journalists? Some influential online sites have never been part of a media or publishing empire. "Citizen reporters", "self-publishers", "bloggers" - don’t get hung-up on labels. Just recognise that it's not black and white; it's many shades of grey.

If you want your news to be shared then stop protecting your news as if it were some sort of priceless treasure. Make it easy for anyone to share it, like it, reuse it. Do the same with your photography. Offer it under the appropriate Creative Commons licence. For example, we allow reuse, but not for commercial purposes.

Recognise that your newsroom is going to be viewed on mobile devices. Make sure it works. That doesn't mean that you have to run off and create apps, but you do need a mobile strategy.

How has social media changed the job of a communicator?

It's made it more challenging and more rewarding. Learning new technologies; appreciating that communication is a two-way process and not simply messaging people. I think communicators are at the forefront of helping the organisation change and deal with the disruption that social media brings.

What changes do you predict for the future of the "company website" and in particular the "newsroom"?

I think there are fundamental changes ahead. Companies need to think about the role of their online newsroom. We need to move beyond simply offering "press material" and change our thinking. EC=MC - Every Company is a Media Company - was, I believe, an idea first introduced by Tom Foremski in a post on Silicon Valley Watcher. It's an idea that's gaining ground with a number of communication thought leaders. Foremski points out: "Companies must learn how to publish, listen, and converse in a very fragmented media world" and reminds us "it is no longer possible to operate a business the old way - such as sending out a news release on Businesswire and briefing a handful of journalists, and sitting back".

The idea is very disruptive, but you should read what Foremski, Shel Holtz and others have to say on the subject. I do believe this is where we need to go.

Can you share any specific examples of good practice in the area?

HSBC's social media newsroom in the UK is interesting - one doesn’t think of a bank having news that people want to share on Facebook. It includes links to videos on YouTube, Flickr and integrates Twitter feeds. I'd say HSBC shows good practice, not because there is something innovative on the site, but more because it shows that basically any type of company can make its news more social if it wants to.

I particularly like the BBC news site. You can comment on their stories and contribute your own pictures of newsworthy events.

I may be biased, but I’d put the Opel news site high on the list. It integrates Twitter, blog feeds and Facebook content. Video can be downloaded in a variety of formats. All content can be shared to a numerous social spaces. There's lots of photography to download under Creative Commons. What we have tried to do is not simply make the site functional, but attractive too.

GM launched a social news page on Google+. Is this where newsrooms should be in the future? Who knows? If a company is creating innovative products, it should be reflected in innovative communication. For me this is good practice. Experiment, take a few risks. Could be a success, or could be a failure. You won’t know if you don’t try.

If we are looking towards "every company is a media company", maybe Intel is on the right track with The Intel Free Press. They say: "Our goal is not to duplicate the news and cover every major milestone or event from Intel. Nor do we want this to be the kind of news you may find in a press release. We aim to capture and share interesting behind-the-scenes stories that provide insight into what’s going on inside Intel and indirectly, the tech industry."

When you think about "corporate comms", who do you think of as the audience? Do you need to consider influencers beyond just journalists and bloggers?

It's a very wide audience indeed. Traditionally it has been segmented into financial, business partners, employees, media, government, NGOs and so on. For me, anyone who expresses an opinion about our company or our products is our audience. How we reinforce a positive opinion - and encourage that ripple - and how we try to change negative sentiment into neutral or positive sentiment is our daily communications business. Today someone on Twitter or Facebook has the potential to influence.

I would like to think that most companies see this as an opportunity. If we want to influence the influencers we need informed discussion and dialogue - simply pushing out news is not enough. But a lot of companies are struggling with how to effectively have that dialogue in online spaces. That is the real challenge for many companies, but also where the opportunity lies.

How to: Create and publis...

This short tutorial shows you how to create a multimedia news release on Mynewsdesk and publish it to social media and relevant channels. 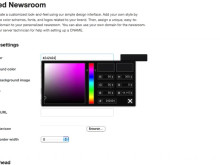 This quick video takes you through the steps to create a 'hosted' online newsroom - a newsroom styled to match your brand on your own site.