Think of something you consider memorable: a personal recollection, a good read, a new dish you tried last night. Chances are you have an image in mind - not an aroma, a sound or a text, but specifically a picture.

Memories are made visually. The human brain is wired to receive, interpret and store vast quantities of visual information. When one of the major challenges of communicating in a climate of 24/7 news and incessant social media feeds centres not only on how to be heard but, crucially, on how to stay in the spotlight, it is essential to focus on image-based strategies for success.

Despites streams of JPEG files and YouTube videos, the most memorable images remain those from art history. The Mona Lisa, Van Gogh's Sunflowers, Andy Warhol's Campbell’s Soup Cans; these artworks represent pinnacles of pictorial excellence. One of the many reasons why they are valued as priceless comes down to their enduring connection with us, the public - the longevity of significance to which today’s brands aspire.

From the Old Masters to modern icons, art history boasts over a thousand years of artistic development into the skill of communicating through images. In the Renaissance, often hailed as one of the finest and most innovative periods for image making, artists such as Fra Angelico and Michelangelo depicted intricate scenes from the Bible and Ancient Mythology, charged with the task of relating the story to the illiterate in such a way as to be readily comprehensible while leaving a lasting impression.

If images are a primary source by which we can absorb and remember information, organisations that learn how to use pictures from an artist’s perspective stand a better chance of competing in a data-saturated environment.

Let's put the theory into practice. To pick one photograph for a press release or a piece of content is tough but when you can't rely on your release being read, it's vital you ensure that a unique piece of visual data does the talking for you.

Here are three techniques from art history to help you with your selection process.

When brands publish content often the main aim is to communicate why people should use your product or service, or highlight the reasons why your brand is different from your competitors.

In religious narratives communicating the ‘why’ over the ‘what’ was a central concern for many artists. They became particularly skilled at using visual techniques and emotive symbols to depict those elements that make an event or person special.

Take Caravaggio’s Supper at Emmaus which you can see in London’s National Gallery, in which two men suddenly realise they are in the presence of the risen Christ. At a glance, it’s easy to understand the surprised gestures that denote a seismic event. No doubt is left as to who is the most important person in the picture, even though he doesn’t look at us; the figure of Jesus is central, bathed in light, wearing a bold shade of unforgettable red and reaches directly out to the viewer to include them in the scene. How can we guess the more elusive reason why this man is different - namely that he is the resurrected Christ? The man on the right’s reaction directly recalls the iconic image of Christ on the cross.

The take-away point here is that every part of a visual counts towards differentiating your brand, not just the product or service itself. From the reactions of your consumers or models in the picture, to the lighting, colour and setting, every part of just one image can help you state your message and relay that all-important ‘why’ that brings people into your brand community.

You might know the practicalities of using horizontal images, but did you know of the visual reasoning too? Our eyes tend to "read" images as we do text - across a horizontal plane. Artists exploited this process as a way of drawing the eye across a story, often painting multiple representations of characters within one seamless landscape to capture a narrative in full.

Take Masaccio's masterpiece The Tribute Money, painted in the 1420s. At first glance this is a simple, memorable image depicting a scene from the life of Christ; look closer and you can see three acts of a play. The centre depicts the starting point when tax collectors demand the tribute from Jesus, who along with Peter points to the lake on the left where a second figure of the Saint takes the money from the mouth of a fish. On the right, the story concludes within the framework of the architectural structure under which Peter number 3 hands over the coins.

For an image accompanying a piece of content, by showing the process of transformation rather than a singular outcome, your story can be depicted in full within one image. If you've just organised or sponsored a special event such as a concert or festival, for example, choose a wide angle showing how people come to engage with the event, from those approaching inquisitively at the back, to people starting to dance and those jumping elatedly at the front. The before, middle and after effects showcase what happened over time and the enduring importance of your brand.

Finally, remember that familiarity resonates with your audience. Renaissance painters often set Biblical and mythological narratives in the streets of their home towns. Viewers would be more likely to adopt the teachings by recognising the relevance of these age-old stories to their everyday lives. Leonardo Da Vinci’s The Virgin and Child with St Anne is set against the backdrop of the Alps in Northern Italy near his home in Milan while Perugino’s Adoration of the Magi depicts the familiar hilly landscape of his native Umbria. When selecting the image for your release, never forget the power of your backdrop and the whereabouts of your target audience. Recognisability is a powerful visual tool for making your message memorable.

Rebecca Jarvest an experienced art consultant with an academic and professional
background in both the art and business worlds. Holding a Masters (Distinction) in Art
History, she worked for international public and private art organisations before operating
as an independent consultant in London.

Rebecca founded Art-Links in early 2013 and, as Director, drives forward the company’s
mission to promote the benefits of art in business. In addition, she writes as Art Editor for
online luxury lifestyle magazine The Sloaney and is an Associate Partner of international
art advisory l’Atelier Camelia.

How a little elephant inspired so many big stories...

We look at the social enterprise Elephant Parade and how they have mastered PR for their campaigns. We hope you will find some useful hints and tips to use for your own campaigns. 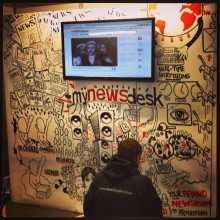 We wanted to do something different that would stand out, intrigue and attract the flock of marketer attendees, whilst painting a good picture about who we are, what we do and why people should care.