Some thoughts from our UK Country Manager Heidi Noemm

Attending Think 2011 in London was a day of insights into how some of the most experienced and renowned PR professionals in the UK think and act in today’s rapidly changing media landscape.

On my way home from the conference I was thinking to myself how similar the problems still are in the UK and Sweden. On the one hand, the UK seems much more ahead of the game when it comes to social media and how companies and PR agencies utilise it in their digital communication. On the other hand, there is still a lot of fear and insecurity in both markets – communicators are feeling that things have gotten ”out of control”, or better said ”out of their control”.

Some key topics of the day that were repeatedly discussed by the majority of speakers were Change, Content and Engagement.

My personal impression, however, was that the topic that was highlighted most throughout the day was Change. The massive changes that are happening in the world of digital communication and how communicators need to adapt quickly in order to keep connected with the audience.

Stepping into the New Age
That things are changing in the PR industry is probably not a secret and PR professionals are well aware of it. PR is moving from ”Push” via traditional media to a more ”engaging conversation” with the audience; moving from spin PR to storytelling and information exchange. It’s obvious that communicators need to become rich content producers instead of using traditional one-way directed SOS-tactics of ”Sending-Out-Stuff”. PR pro’s must identify themselves with the ”Agents of Change”. You cannot tell your clients to change if you are not changing yourself. The new role of PR agencies is helping to transform old business models into new.

The democratization of citizens through social media is evident; now it’s all about engaging and being transparent as an organisation to gain people’s trust and brand loyalty.

But people don’t like change …
Changing behaviour is not that easy. It’s much easier to believe that the traditional way of doing things will remain and the current trends will disappear sooner or later. This has always been the mindset with New Media and new trends, and we’ve been proven wrong so many times before. Things are changing, and either you are curious, adapt and “stay fit” or you lose the race at some stage.

Most people have by now realised the impact of Social Media and that it’s not just a temporary trend. It has become mainstream. Digital media has become social – more than 50% of UK citizens are on Facebook, and the figures are continuously growing. This is where the audience is, it’s where people spend their time, which is why its usage is growing so rapidly and communicators need to understand its value and potential and learn how to interact with their audiences in a proper way. I would even state that communications are shifting from B2C towards B2P – business to people, or in some way “People to People”, as organisations are opening up, becoming more personal in their communications and building relationships with people and not just seeing them as the consumer bringing revenues.

”If something is interesting, it’s on Twitter”
Many people are picking up breaking news first via Twitter, not on TV or news sites. Twitter is serving as a real-time news stream but is also a trend spotter, showing companies and journalists what people talk about and find interesting.

Twitter is not just another Social Media channel. It’s an invaluable tool for expressing the thinking and attitude of the brand, but it also reflects what consumers think. It is a forum for citizens, organisations and media institutions to exchange opinions.

Therefore, using social media only as a broadcasting channel is a waste. Finding out what people actually think and say about your brand is highly valuable for organisations. Receiving people’s comments and feedback, positive or negative critique should be seen as a resource, not a threat. However, the huge pressure and fear of companies is evident because the audience, the consumers, now have a voice. Which is why the typical objection of why companies don’t use social media is that they are afraid of the negative things can be said about the brand.

What organisations often try to ignore is that they cannot avoid the voice of the people on the web. But what you can do is listen, learn and respond, and you will gain a lot of important customer insights, credibility and loyalty in return. Changing this mindset is the big challenge here.

Big changes, even for journalists
More and more journalists are using Social Media for research and for gaining insights into what people think. Finding user generated content is highly valuable for journalists, it’s not only what the organisations communicate, it’s what people say that’s relevant too. Using social media and search engines has become the tool no 1 for journalists when starting off their research. This is where you need to have your presence and be visible.

Journalists will block you if you keep pushing out emails with irrelevant press releases. This was already stated by Chris Andersson in his blog post from 2007. Emailing has become less and less effective, typically it’s not in their inbox journos are looking for background information and ideas. It’s Google that is your company’s reputation-management-system. It’s the information that can be found about your organisation that is shaping your image and creating the conversations people are having about your brand.

The future of PR 2.0?
So where is this leading us? The future is definitely going to be about the ”survival of the fittest”; only the ones who care about the audience and change their behaviour are going to succeed and reach out, the ones who are curious enough to explore the potential of the web will grow with the evolution of PR 2.0.

Many organisations are still not aware of that they need to invest their money and resources into “real” content creation and stop seeing Social Media as cheap alternatives to do digital marketing and PR. Start listening to the audience, start having conversations and seeing what is being said about the brand and start caring about the individual voices of the crowd. Building your brand reputation is about producing content that is both interesting for the potential customer but also engaging the wider audience.

Having attended this day of inspiration and transformation at Think 2011, I have gained deeper insights into how PR people in the UK currently think. And of course, how our services, The News Exchange Site, can fit in and help communicators, marketers and PR people with their daily work. Growing our UK business means understanding the market and knowing the needs of our (future) clients.

And it seems that we are expanding into the UK at the right time; when communicators need a tool to keep control in their daily work of distributing and spreading their content in the complex digital media landscape and gaining visibility online. When it’s not crucial anymore to push out information to a huge anonymous audience but rather finding your key influencers on the web and engaging them around your content.

Mynewsdesk UK has very exciting times ahead – and we are just in the beginning to explore the huge potential of the UK market, being the second largest PR market in the world … 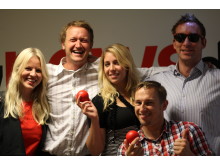