#ObeyYourVerse uses inspirational, lyrical quotes from Drake, Nas, Rakim and Notorious B.I.G which were printed on 16 million cans. "The artists were selected based on their reputation for being true to themselves through their music and advancing the culture", comments brand owner Coca-Cola.

#ObeyYourVerse has created a bit of a buzz, but not without conflict...

The collective stepped up to challenge the drink giant's campaign by setting up #ObeyHerVerse, where we're asked to nominate female rappers who deserve to be repped and celebrated on a can.

In addition to almost 5000 reppers, there's support from Spotify and the campaign seems to have picked up some media attention. Now there would be a million dollar (or SEK) opportunity for another brand to step in and gain some street cred among female consumers!

Who do you think is going to be the first one to jump on the wagon?

And while we're on the subject of celebrating ladies...

Cheeky Taylor - you did it again!

We have written about Taylor Swift's antics before. She handles pop fame in a fun, fresh way and her latest disagreement is no exception.

Her open letter on Tumblr criticises the policy's effect on indie artists.

"We don’t ask you for free iPhones. Please don’t ask us to provide you with our music for no compensation," she wrote.

And so Apple change their mind, agreeing to pay artists 0.2 cent for each song, just like Spotify.  Appraisal arose, and I'm wondering - is there anything Taylor Swift can't do? Sceptics disagree:

Whether or not this was staged, it seems both parties got what they wanted. Swift's album sells like no other and now everyone knows about Apple's new streaming service.

The aim is to inform everyone that fixed contracts are no longer standard, Giffgaff is promoting freedom to the user. Community is core to their strategy, even customer service is managed here.

Their little campaign is great for customer retention and they come across as a pretty friendly provider.

We held FutureComms15 on 18th June in London - my oh my did it get people talking!

@Robert_Rose, Chief Strategy Officer, Content Marketing Institute, pointed out that we are not in the business of telling the truth – but rather what ought to be the truth, stirring the audience from the outset.

"Many of the tweeting commentators found it hard to believe that we were still having this discussion – that it felt more like it belonged on an agenda from 20 years ago rather than one about the future of communications", wrote CIPR's Conversation Editor, Rob Smith.

Go and have a look at yourself - all tweets can be found on Twitter under #fc15 hashtag.

One of my favourite reviews of the day was written by Paul Sutton.

You can read the whole wrap-up of the FutureComms15 here.

See you next year! 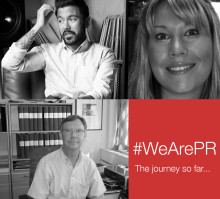 #WeArePR: The journey so far...

#WeArePR is a project is about listening. We are conducting and publishing these interviews in no intentional order and as a result there was no way of knowing what we might find.

Stephen Waddington shares his key take-outs from FutureComms15 - the biggest PR & communications event of the year.