Karin Zingmark is the 4th interviewee for the #WeArePR series, an exploration into the evolving world of communications through #PRTech.

First of all, tell us who you are and how you relate to the wide world of PR?

I am Karin Zingmark, the CMO Lead for Microsoft in Sweden and I’m responsible for communicating to our audiences there. Before that, I was head of communications for MTG, Viasat in Sweden, a big broadcasting company. I’ve actually been in the TV industry all my life doing PR.

Since I made my first homemade newspaper when I was 7 or 8 years old and distributed it to all of my relatives and neighbors, landing a role within communications was not a surprise. I’ve been fortunate, actually, to be at companies where my lust to experiment has been appreciated. I’ve always had a lot of freedom to try things out.

When I took on the PR role for the first time—I was assigned to a really cool man who had been a top journalist at Sweden’s largest tabloid newspaper. He was the one who taught me PR.

Whenever I was going to do a press release or call a journalist, I could always give him a ring and check, “Would this work? Is this the way journalists think?” That was a great, very hands-on mentorship that we had going for a year or so.

Then, after that, I’ve been really inspired by people who understand social and who understand communication in a broader sense, but focus on digital. I’ve made some great connections through Twitter and built on relationships from there.

I’ve made a lot of mistakes, but I have a very positive view, so I tend to not dwell on it, and instead just shrug my shoulders and think, “OK, I’m learning from this.”

Once I had just had my appendix removed and I was very tired and in pain, and I shouldn’t have been looking at my emails. I got sent this blog post where we were criticized.

My number one rule is to never ever react with emotions, to just stay cool, but this time I didn’t. I got irritated in an email to the blogger, which of course led to it being published.

I’m one of those passionate people when I work, and that’s mostly a good thing, but in that sense, it can also be a bad thing. I should have just shut down and take a break to get well.

Well, PR has changed drastically, and that has to do with digital communications, social media as well as the birth of bloggers and digital influencers. Now, more than ever, communications across paid, earned and owned media is integrated. So, it’s broadened my view on PR.

It’s much broader than before, and that’s really fascinating and fun. But it can be a challenge for companies, because there are so many different ways to get your message out there. Also, internal silos and boundaries between departments often stand in the way of truly integrated communication.

I think we’ve passed the nice and happy era of companies being able to make use of social, just like that.

Where we’re going now is that companies need to adapt social/digital and make it an integral part of the company itself. Companies have to start getting into a position where they can use social to show true transparency.

It’s also important that brands understand and adjust to the speed and agility in which the media landscape is moving. We have to start integrating our communication as a whole. So, when we run marketing campaigns we have to make sure not only having social, digital and PR fully integrated from start to end but also customer support, HR etc.

It’s also important that brands understand you can’t make your way in social without paying nowadays. Facebook and LinkedIn and all of these large networks are understanding their worth as distribution platforms for companies, so you have to be prepared to pay. Preferably in creative ways, so that you avoid using traditional one way push-advertising in this media. 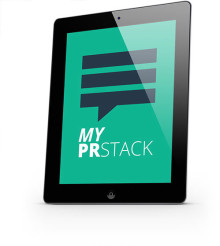 #PRStack inspires and educates through the power of crowdsourcing

Yesterday's launch of the 2nd #PRStack ebook (beyond its obvious purpose) reminded me how valuable it is for PRs, marketers and communications professionals to demystify, share and learn about marketing and PR tech in order to move the industry forward.