The Metropolitan Police Service has launched a new online press office with Mynewsdesk to help streamline their communications with the media and general public.

The Met, who operates the UK’s busiest press office, has partnered with PR technology pioneer, Mynewsdesk, to help better support the delivery of their broadcast messaging and simplify their communications workflow.

Mynewsdesk’s online press office will not only help The Met provide a more efficient service to the media, but it will also provide the public with the latest news headlines which are affecting their regions and the wider country. Anyone can follow The Met’s press office and receive news directly to their inbox.

Furthermore, the analytics tool will enable the press team to measure the effectiveness of their content as well as share stories, official images and social messaging in a more efficient manner, anytime, anywhere.

Already, The Met’s press team has seen an increase in social engagement, with the best performing stories generating thousands of Facebook shares and Tweets.

Michael Piotrowski, Digital Communications Consultant at Mynewsdesk, said, “In this day and age, the media is inevitably inundated with breaking news, so to receive the stories directly from its original source, the Metropolitan Police Service, will save both the journalists and the press contacts at The Met a huge amount of time”

Michael added: “With so many ways of receiving news, it was important for the Met to be able to efficiently and simultaneously broadcast their stories via email, across social channels, The Met website and more, at just the click of a button".

Mynewsesk's online press office will transform the way the Metropolitan Police Service broadcast their messages, as well as how they create content and host visual content for the media to easily download. It has been reported that Mynewsdesk has already significantly improved The Met's communications workflow, and has reduced the number of systems and strategies required.

​CALM has received enormous exposure this week both through the promotion of their Panorama appearance and following the announcement of new partnerships with Professor Green, Topman and Lynx.

​When it comes to sharing news, views and information about your restaurant, hotel or hospitality business or drumming up publicity, a good story is only half the battle. The other half is getting it out there. Building up and engaging with contacts across a wide range of platforms, ensuring synergy across different mediums, message consistency. 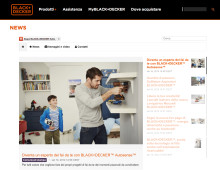 PR Manager Lizzie D'Angelo discusses how their Chocolate Tea Party has managed to attract industry influencers such as chocolatier Paul Young, and other chocolatey-celebs, to join the movement - and explains how their newsroom has helped them in fundraising and finding new audiences.

Video: How has an online newsroom helped SportsAid tell their story?

SportsAid helps young disabled and non-disabled athletes to achieve their ambitions. Before Mynewsdesk, SportsAid didn't have a media centre - they relied on their own website and separate channels. Using an online newsroom has changed things a lot.

Moray Council Gets Coverage Within Minutes Of Using Mynewsdesk Newsroom

Moray Council launched an interactive “virtual” newsroom as part of its website redesign and the new approach helped them generate online coverage within minutes of publishing. Here's how it panned out....

Thatcham Research Is Taking Its Comms to the "Next Level" With Mynewsdesk...

​Thatcham Research, the research centre for automotive motor insurers, last wee​k took their comms strategy to "new levels" with the acquisition of our digital PR platform, Mynewsdesk. We caught up with Thatcham's Comms Executive, Iain Wallace, to dig into the details of how they'll be using Mynewsdesk to streamline their workflow, improve SEO and boost influencer relations.