Earlier this morning, MyNewsdesk, the News Exchange Site, unveiled the most comprehensive redesign of MyNewsdesk.com since its founding in 2003. The revamp was not only done to improve the site’s overall appearance and navigation, but also to implement the eagerly anticipated overhaul of the Plus Account pressrooms, MyNewsdesk’s premier feature.

And so, after a period of intensive work, MyNewsdesk launches the new Social Media Newsroom.

Now spreading news becomes even more streamlined. Using the Social Media Newsroom, not only can MyNewsdesk customers publish news releases and share them on their various Social Media channels, they can also have these channels and their contents displayed in their pressroom. This means that visitors to a company’s pressroom can easily read, comment on, and share the latest newsflashes, whether it’s the latest Twitter updates, the latest YouTube videos, or the latest blog entries. This also means that journalists and influencers in the media can easily keep abreast of the latest conversations about a topic related to that company.


What is a Social Media Newsroom?

Kristofer Björkman, MyNewsdesk Founder and Product Evangelist, says, “It’s about opening up yourself, your company, and letting people in, whether it’s journalists, your loyal customer or your hardest competitor. It’s about listening to your audience and engaging in conversations. It’s about interacting with them, on their terms.”

According to Kristofer, “the word ‘Social’ in ‘Social Media’ will soon become irrelevant. The whole web is social. People are social. Our customers and the journalists that use MyNewsdesk are all social. Therefore, it should be given that a Newsroom is social.”


All of MyNewsdesk.com including all Plus Account Pressrooms have been updated. At no extra costs.

The majority of changes to MyNewsdesk are live, but the entire launch will be done in a few steps to ease the process. Several new features, sections, and functions will be live in the coming days. However, at this time, all customers that presently have a pressroom will notice that theirs have been updated. They now have access to all new functionality and can immediately start improving their MyNewsdesk-based PR activities.

For those that can speak Swedish, you can view Kristofer Björkman's take on Social Media Newsrooms here.

MyNewsdesk makes it faster and easier for companies, journalists, bloggers and
opinion leaders to gain relevant exposure – on their own terms. It matches interested
users with press releases, videos, images and other content, all instantly searchengine
optimized and automatically published on social media platforms.

The site serves more than 10,000 companies and has a 97% customer satisfaction rate.

MyNewsdesk is the new media partner for the Nordic Media Festival, held in Bergen, Norway, from May 11 -13, 2011. As part of this cooperation, the Nordic Media Festival, will open a social media newsroom on MyNewsdesk, making it easier to spread and share information about the conference, with journalists and other interested parties in Norway, Sweden, Denmark and the UK. 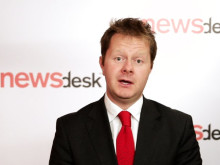 Jonathan Bean, COO at MyNewsdesk, talks about the Social Media Newsroom, a premier feature on MyNewsdesk.com.