After successful expansions into Denmark and Norway, and having recently opened an office in Finland, Mynewsdesk now takes its first leap outside of Europe to Singapore.

Often referred to as the gateway to Asia, Singapore has enjoyed a recent digital boom, attracting dozens of startups to this web-savvy country. According to Jonathan Bean, COO, “a recent study by the World Economic Forum and INSEAD concluded that Singapore was one of the world’s most networked economies, second only to Sweden. Their penetration of PCs and broadband is nearly total.”

Mynewsdesk sees its expansion to Singapore, the first office outside of Europe, as a logical step considering the company’s organizational structure and it’s high ambition. Mynewsdesk is owned by NHST and this setup will combine NHST’s fastest growing region with the group’s fastest growing enterprise, Mynewsdesk.

“NHST being in Singapore will help ease our transition from being a predominantly Scandinavian business to becoming a truly global company,” says Johan Höjvall, acting Country Manager and Mynewsdesk rising star. “They know the market, they have the connections, and they have the infrastructure. On top of that, our market studies concluded that South East Asia is an emerging market with strong economies throughout most of the region. Strong economies tend to indicate a willingness to invest in marketing and PR. ”

Mr Höjvall started at Mynewsdesk last year, bringing with him international sales and marketing experience after having worked in Kuala Lumpur and Bangkok. Most recently, he managed Mynewsdesk’s Gothenburg office.

“I’m very excited to be back in Asia,” he says. “The pressure is great, but I know that Mynewsdesk’s services and PR philosophy will be accepted with open arms in Singapore.”

MyNewsdesk makes it faster and easier for companies, journalists, bloggers and
opinion leaders to gain relevant exposure – on their own terms. It matches interested
users with press releases, videos, images and other content, all instantly searchengineoptimized and automatically published on social media platforms.

The site serves more than 23,000 companies and has a 97% customer satisfaction rate. 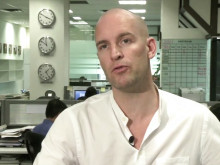