Mynewsdesk has been selected as the official newsroom partner of the Guardian’s Changing Media Summit 2013, to be held in March in London.

As well as partnering with The Guardian for the event, Peter Ingman, founder and CEO of Mynewsdesk, will be speaking at the two-day event drawing on extensive research the company recently undertook in to how the top 100 global brands are using their newsrooms in 2013.

His presentation, titled 'From Press Release to Media house', will look at the changing manner in which brands are communicating with their influencers and end users, the rise of the brand as publisher and how these developments have impacted the role of the modern day newsroom.

“The Changing Media Summit has rapidly established itself as one of the leading events for anyone working at the cutting edge of digital innovation,” said Ingman. “Mynewsdesk is part of a diverse mix of businesses and thought leaders from across the commercial, creative and digital sectors, that are driving the way we all think about content and its power to influence.”

In anticipation of the event, the Guardian will be introducing the speakers and offering insight in to their presentations via its new, dedicated Changing Media Summit newsroom. As well as providing a look at the individuals speaking, it includes an interview with Peter Ingman, offering expert insight in how brands are starting to behave like media-organisations.

The Changing Media Summit newsroom also offers an exclusive preview of the upcoming redesign to the Mynewsdesk platform. Emphasising the increasing importance of the role played by visual elements and responsive design techniques, the new newsroom design puts images at the forefront of its layout on both desktop and mobile devices.

Today it is established as the must-attend event for anyone concerned with creative and commercial success in the digital age. This year’s event will take place on 21st and 22nd March at King's Place, London.

Tell your story with your newsroom

Mynewsdesk is the leading all-in-one newsroom and multimedia PR platform.

Over 30,000 brands as diverse as Costa Coffee, Ford, Canon, LG, Virgin Trains, Lego, L'Oréal, and EMI use Mynewsdesk to manage and measure their PR activity, achieve greater online visibility across search and social media, connect with their key influencers, and tell their stories. 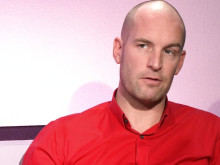 Mynewsdesk CEO Peter Ingman talks about how brands are starting to behave like media organisations and how they're setting about publishi...